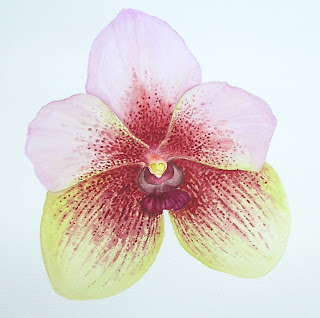 This is a Vanda Hybrid (Reverend Masso Yamada). The Vanda orchid
group is made up of about 50 different species of Monopodial orchids. They have showy long lasting blooms in a large variety of colors. Watercolor on paper. 11" x 11" 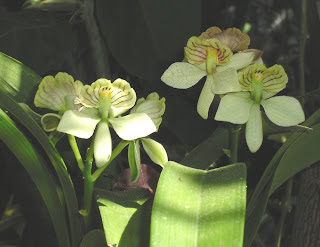 Another inspirational image from the Garden of M. I cant wait to get to work on this as a large watercolor

From Wikipedia, the free encyclopedia

• •
Prosthechea is a genus in the orchid family (Orchidaceae). The name is derived from the Greek word prostheke (appendix), referring to the appendage on the back of the column.

The genus Prosthechea has only recently (1997; published in 1998) been reestablished by W. E. Higgins as a distinct genus (see references), but some species were later transferred to EuchileEuchile mariae and Euchile citrina) by Withner (1998). Previously, the species had been included in different genera : Anacheilium, Encyclia, Epidendrum, Euchile, Hormidium and Pollardia. The status as genus was confirmed by recent data, based on molecular evidence (nuclear (nrITS) and plastid (matK and trnL-F) DNA sequence data) (C. van den Berg et al. 2000) (e.g.,

This a neotropical epiphytic genus, occurring from Florida and Mexico to tropical America.

The roots of all Prosthechea species possess a velamen (a thick sponge-like covering) differentiated into epivelamen and endovelamen. Flavonoid crystals were observed in both the roots and leaves. The erect stems form flattened or thickened pseudobulbs. There are 1 to 3 terminal, sessile leaves. The leathery blade is ovate to lanceolate.

The flowers form an apical, paniculate raceme with a spathe at the base of the inflorescence . There is a great variety in the flowers of this genus. They may be attached to the stem by a peduncle or may be sessile. They can flower on the raceme at the same time or successively. They can be resupinate (i.e. turned upside down) or not.

The sepals are almost equal in length, while the petals can be much slender. The lip is pressed closely (adnate to proximal) to half of the column and shows a callus (a stiff protuberance). The column is 3- to 5-toothed at its top.

The are four, almost equal pollinia with an inverted egg shape. There are four stalks (or caudicles) in two pairs. The beak is entire, curved into a half circle and covered with viscous glycoside crystals.

The fruits consists of ellipse-shaped to egg-shaped , 1-locular, 3-winged capsules. 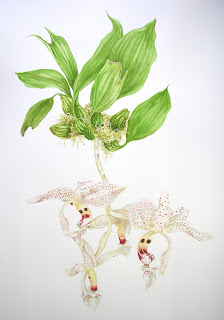 The finished painting of the
Posted by Parnell Corder at 12:39 PM 4 comments: