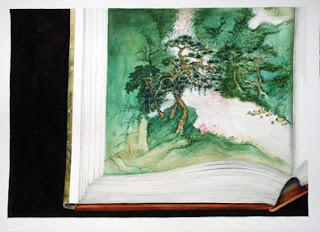 Another painting of another book. More Orchids to come.
Posted by Parnell Corder at 10:10 AM 3 comments: 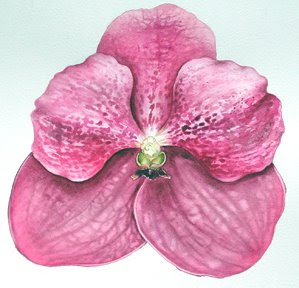 Here we have another of the smaller paintings featuring the bloom. This one of Vanda Sandra Johnson 'Crownfox'. I love the names. They are always an interesting combination of the growers and "parent" plants of the specimens.

Check this article out written by the undisputed king of VANDA ORCHIDS Mr Robert Fuchs. 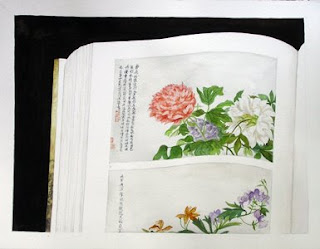 As you might now I create many different kinds of art imagery. So I thought I might include something new Ive been working on besides the Orchids and other botanicals.

I started a series of paintings of books. I really enjoy the challenge of duplicating the book and the imagery in the book as exact to actual scale as possible. An interesting aspect of this piece was the Chinese characters on the left side of the painting. 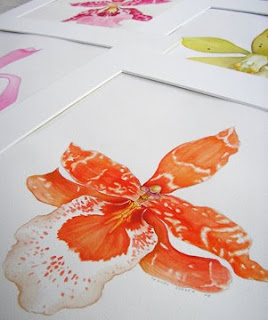 Well it has been a while since I posted. Ive been tied up with lots of different things. All of them good.

One of those good things is that I am sending some of the Orchid works to be on consignment with a really cool shop over on the opposite coast in Essex, CT. Check them out :
RIVER

They create amazing floral designs and sell unique objects and artifacts in their store along with cool art like mine! Stop by if you are in their part of the woods and say hello. Its the perfect spot for a little Holiday (or any day) Retail Therapy.

*Ask for Joe or John 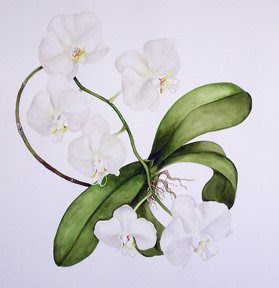 Some of my work is featured in a story about my friends Conn and John over at:

The story and Pictures are at the link below:
http://www.designspongeonline.com/2008/06/sneak-peek-conn-and-john-in-hawaii.html Odontoglossum, first named in 1816 by Karl Sigismund Kunth, is a genus of about 100 orchids. The scientific name is derived from the Greek words odon (tooth) and glossa (tongue), referring to the two tooth-like calluses on the base of the lip. This genus of cool to cold growing orchids is to be found on open spots in the humid cloud forest at higher elevations from Central- and West South America to Guyana, with most species around the northern Andes. The abbreviation for this genus is Odm in horticultural trade. DETAIL
The pseudobulbs are compact with leaf-like bracts at the base. They give one to three apical leaves. An arching (and sometimes erect) inflorescence grows from its base. The ruffled sepals and petals of these spectacular flowers are spreading. The lip is rather complex, entire or with three lobes. It stands erect or parallel to the long column. The high altitude species show long inflorescences with up to 150 flowers (as in O. cirrhosum), while the lower altitude species have shorter inflorescences with up to 20 flowers. These flowers may be white, red, purple, brown, yellow, or even be blotched with a showy blend of many colors.

Posted by Parnell Corder at 8:54 AM 2 comments:

May - Cymbidium- From the Garden I am fortunate to have a nice group of potted Cymbidium in the garden to offer up their beautiful blooms for a nice portrait.

The photo and the painting are different plants. You can tell by the difference in the
labellum or lip. This is a watercolor of one of my favorites. I have had this particular plant for I'd say... 12 years? I have re-potted and divided it several times over that period.

The blooms last for a very long time if the darn bugs and slugs don't get to them. They last almost as long as cuttings in a vase indoors. Beautiful, Beautiful. The source material for this drawing is my- COLMANARA, Wildcat 'Lorene' AM/AOS. Which I got as a rescue/charity case orchid sometime ago. I am very proud to say the patient has come back to us and has experienced a full recovery. Well, It turns out they are two different Varieties. Indeed. Enjoy non the less look for more images of both soon. Curious, I noticed once I had finished this drawing that the specimen I was working from was very different from the plants in the previous post even though (I think) they are from the same group. The plant I have has been indoors since I received it. The plants in the previous post live outside and get more light so they have matured faster and the blooms have opened up more completely than mine. The colors have separated more distinctly into spots and stronger defined color lines. This is my theory so far. Any Ideas? Am I working with two different Paps? I am going to ask my friends at the AOS - American Orchid Society.